Thank you for sharing
your stories.
We are proud
to announce
the 2019
winners. 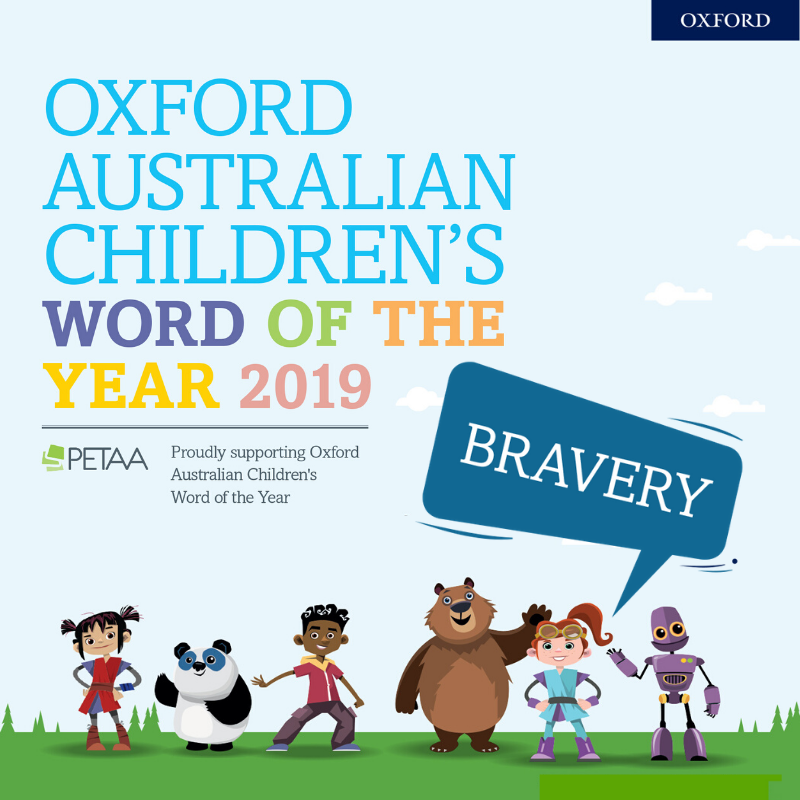 OUP ANZ Publishing Manager (Primary), and member of the judging panel, Emma Magill said the word ‘bravery’ was an example of how Australian primary school children are engaged in social issues taking place outside the school yard. Understanding consequences, taking ownership, overcoming obstacles and initiating action were clear themes in the submissions, speaking to the bravery and optimism of young writers.

SUMMARY REPORT
What do Australian children enjoy writing about?

Read more about the 2019 Oxford Australian Children’s Word of the Year in our Summary Report. Comments from the judges

“The theme of resilience and hope was common in many children’s stories. In particular the word ‘bravery’ was often used, and associated with the words ‘courage’, ‘fearless’ and ‘determination’, demonstrating children’s understanding of synonyms. The ability to ‘pick oneself up’ and to ‘keep trying’ were positive motifs in some of the stories. In a number of stories from the more senior age group, the theme of hope is used in relation to various troubles besetting society today: the ability to think positively and ‘hope’ for a better future when the world environment is under pressure; and the need to ‘hope’ for a better outcome for people who are going through tough times."

“As I read through the entries in all categories, I keep returning to the Year 2 student from Regency Park Primary School who tells us, ‘We can all be brave as long as we try to be.’ Bowie describes what ‘bravery’ is in a remarkably mature way and shows how it doesn’t only relate to grand adventures but to how much we need it in our everyday lives – in singing a song or in making a new friend, for example. The student ‘s conception of bravery and its place in our lives, and his positive and mature understandings that everyone gets scared sometimes but that everyone has also been brave sometimes, is generous, positive and inspiring."

"Bravery was selected as word of the year by Bowie, Year 2, and Molin, Year 3, but also perfectly reflects other word choices students made, such as ‘determination’, ‘fearless’, ‘adaptability’, ‘courage’ and ‘perseverance’. It underpins the adventures stories, personal quests and accounts of overcoming difficulties big and small, and describes many of the writers’ attempts to stand up and be counted about issues they care about. Understanding consequences, taking ownership, overcoming obstacles and initiating action were clear themes in the submissions, speaking to the bravery and optimism of our young writers.".

The winners and their stories:

Once there was a boy who only lived with his Mum in a very Old house. It had scraps of metal. He was born in the 1960s, every day the house would fall apart more and more. Metal scraps of wood and junk would peel and tumble off the old house. Looking at the piles of bits and bobs gave the boy an idea! Maybe he could take the junk and recycle it by making it into something new!

Emma loved to swing on the bars at gymnastics. All her classmates and teacher, Miss Ella think she's the best in the class. But one day a new girl, Mia comes to gymnastics. Mia was on the bard when Emma saw her do a backflip. Emma said to her, "I can do that." Mia landed softly and said, "Okay then show me."
Emma couldn't do a backflip because she was too scared instead she fell off.
Mia laughed and said "you can't do a backflip." She told everyone in the class that Emma has fallen. They all thought Emma was the best now. This made Emma sad. She kept practising until she finally did a backflip. Everyone e in the class clapped and told her she was better than Mia again. Emma said "I don’t care if I'm the best. I'm not scared to do a backflip anymore.

I think the word adaptability is important in life because I have adapted to a lot of places. I was born in Singapore and was there till I was 3 years old. I went to 3 year old kinder and made lots of friends. I even did my very first stage show.
Then one day my parents said “we are moving to India”. I was very sad because I missed my friends. When we moved to India there was massive floods and our house was flooded. We temporarily moved to my friend’s house. We suffered a lot because my sister had ear infection, there was power outage for many days and we had very less groceries. I noticed how people were suffering.

After that we moved to Sydney and I went to 4 year old kinder. I met my dad after a few months. I enjoyed the new place, new friends. When my parents said we are moving to Melbourne. But this time I was happy and ready because I knew change is always good. I learnt to adapt to new people, places and things.


Today I went to the snow. I was scared but I didn’t care. I am a very brave girl, I know it in my heart. I use the word bravery everyday in my life.

Today is competition day. I have trained every weekend leading up to now and today is the big day. I am feeling as nervous as a pianist about to play a piece of music in a grand hall but I remember I am a brave girl.

I am in race number 4 so I have to watch the other races until my turn. I HAVE ONLY ONE CHANCE!......

NO! Wait I’m not scared I am brave. Now it is race number 4. It is my turn to race 6 other people.

The race has began. .


“Timothy” that was mom’s final tone.” Pick up this garbage and mess before you get lost in it.”

Timothy was too busy with his new game. “All the junk could find their way themselves to the garbage spot” he thought. Timothy was so engrossed in his play he didn’t realize that time was flying.

“Timothy you need to clean up this mess before it becomes too late, your room is getting polluted”, his mom’s calm but sorrowful voice came up the stairs.

“Fine” with a sigh Timothy got up from the couch. There were plastic wrappers all around, plastic bottles of all sorts lying there. Broken glass, tin cans, pizza cartons. Take away containers with rotten food, paper bits, used batteries, bubble wrap etc. filled his room.

He grabbed a garbage bag and stuffed waste randomly without sorting. Suddenly there was a loud groan and the black garbage bag started growing in size. It grew to the size of his room and gave a (sic) ear splitting roar.

The monster was made up of all wastes; the food, plastics, recyclables-all mixed, it looked totally polluted. Mon’s tearful voice came up again. “Didn’t I warn you that it would get too late.” The monster grabbed Timothy and vanished into thin air.

Timothy is us humans, mom represents Mother Nature and the monster is the pollution done by us humans. When we don’t listen to the warnings given by Mother Nature, pollution ends up destroying life. Take action and care for your nature. Pollution is some humans can control.

When we fall down, we fall as one
.
When we stand tall, we reach up to the sun.

When we strive for change, we never back down.

And if it’s between men and women we get thrown to the ground.

But now striving for is thought of as weak.

Equality is now a word we can’t speak.

They think they have silenced us, but we are saving our voice,

For when we arrive they will be deafened by our noise.

We will tell them that we’ve had enough of their hate,

Close your eyes…
Escape to a land of colour beauty and life. You might be at the Great Barrier Reef of the Amazon jungles.

But wherever you are, find its beauty, embrace it. Then imagine it was all gone.

The reef could be white from global warming or the fish could be dead or sick from pollution. We all try our hardest to push this fact away, but it is happening, our world is dying but we can do something about that.

All of these problems have more factors to them and they are getting worse and worse. Mathematically we can save our world completely, but we can improve it by a lot more. Our future could be a horrible mess with no animals and
Our future is in our hands, let’s not throw it all away.

Help your students to craft compelling stories with our writing tips for teachers. This helpful resource has been developed in partnership with the Primary English Teaching Association of Australia (PETAA). Thank you to our judges and experts who provided commentary on the most significant words that featured in the students writing. Read more in our Summary Report above.

Emma Magill is OUP’s Primary Publishing Manager. She has worked in educational publishing for 20 years in both the UK and Australia, and has experience across academic journals, higher education, secondary and primary. In her spare time, she has been a freelance culture writer in London, volunteered on the Education and Training Committee of the Music Publishers Association (UK), volunteered on the Schools Committee of the Australian Publishers Association (Australia) and chaired the Educational Publishing Awards Australia in 2017. A life-long lover of literature, Emma is passionate about the publishing industry and has a firm commitment to producing resources that help children learn to read, read to learn and read for pleasure.

Lana Schwarcz is the Family Programs Officer at State Library Victoria. She also works as a playwright, performer, puppeteer or comedian, depending on who you ask and what day it is. Her hobbies include dogs, other dogs and avoiding writing proper artist biographies.Professor

Professor Rosemary Johnston is the author of Australian Literature for Young People (Oxford University Press 2017) and the Literature section of Literacy: Reading, Writing and Children’s Literature (Oxford University Press), first published in 2001, with a sixth edition due in 2020. She has led several research projects, including ‘New Ways of Doing School: Mixing story and technology to generate innovative learning, social and cultural communities’ (funded by the Australian Research Council), as well as other large externally funded projects, notably IMC Sky High, which works with students in areas of educational disadvantage.

The Oxford Australian Children's Word of the Year is one of the ways OUP engages with the ever changing language of Australian children.  Read about previous Words of the Year in our Summary Report. Looking for the UK Children's Word of the Year? Click here.