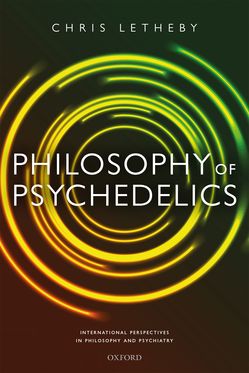 Recent clinical trials show that psychedelics such as LSD and psilocybin can be given safely in controlled conditions, and can cause lasting psychological benefits with one or two administrations. Supervised psychedelic sessions can reduce symptoms of anxiety, depression, and addiction, and improve well-being in healthy volunteers, for months or even years. But these benefits seem to be mediated by "mystical" experiences of cosmic consciousness, which prompts a philosophical concern: do psychedelics cause psychological benefits by inducing false or implausible beliefs about the metaphysical nature of reality?

Within the book, Letheby integrates empirical evidence and philosophical considerations in the service of a simple conclusion: this "Comforting Delusion Objection" to psychedelic therapy fails. While exotic metaphysical ideas do sometimes come up, they are not, on closer inspection, the central driver of change in psychedelic therapy. Psychedelics lead to lasting benefits by altering the sense of self, and changing how people relate to their own minds and lives-not by changing their beliefs about the ultimate nature of reality. The upshot is that a traditional conception of psychedelics as agents of insight and spirituality can be reconciled with naturalism (the philosophical position that the natural world is all there is). Controlled psychedelic use can lead to genuine forms of knowledge gain and spiritual growth-even if no Cosmic Consciousness or transcendent divine Reality exists.

Philosophy of Psychedelics is an indispensable guide to the literature for researchers already engaged in the field of psychedelic psychiatry, and for researchers-especially philosophers-who want to become acquainted with this increasingly topical field.

`This excellent, well-argued, book is required reading for anyone with interests in philosophy of mind, philosophy of psychology, and philosophy of psychiatry. It presents the first book-length argument for the effectiveness of psychedelic therapy and provides an account of how this effectiveness may be understood from within of cognitive neuroscience. Everyone should read this book! ' Richard Brown, Humanities Department, LaGuardia Community College, CUNY & M.S. program in Cognitive Neuroscience at the Graduate Center, CUNY

`Philosophy of Psychedelics is really two books in one. It provides an easily understood, scholarly and detailed review of psychedelic science, spanning phenomenology, psychology, neuroscience, and medical therapeutics. But setting this book apart from other recent books in this rapidly emerging field of inquiry, Chris Letheby takes his philosopher's scalpel to addressing intriguing philosophical implications of psychedelic research including the unsettling question of whether the claimed benefits from psychedelic experiences require the induction of delusional beliefs. This very readable volume should be of interest to scientists, philosophers, as well as those simply curious about recent renaissance in psychedelic science and therapeutics. ' Roland R. Griffiths, Ph.D. Director, Center for Psychedelic and Consciousness Research, Professor, Departments of Psychiatry and Neuroscience, Johns Hopkins University School of Medicine

What is Mental Disorder?

The Metaphor of Mental Illness