A Meaning to Life 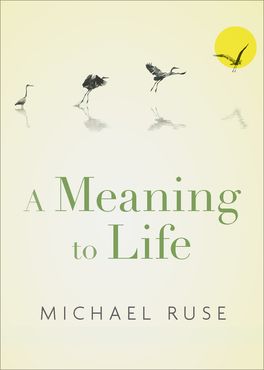 A Meaning to Life

Does human life have any meaning? Does the question even make sense today? For centuries, the question of the meaning or purpose of human life was assumed by scholars and theologians to have a religious answer: life has meaning because humans were made in the image of a good god. In the 19th century, however, Charles Darwin's theory of evolution changed everything—and the human organism was seen to be more machine than spirit. Ever since, with the rise of science and decline of religious belief, there has been growing interest—and growing doubt—about whether human life really does have meaning. If it does, where might we find it?

The historian and philosopher of science Michael Ruse investigates this question, and wonders whether we can find a new meaning to life within Darwinian views of human nature. If God no longer exists—or if God no longer cares—rather than promoting a bleak nihilism, many Darwinians think we can convert Darwin into a form of secular humanism. Ruse explains that, in a tradition going back to the time of Darwin himself, and represented today by the evolutionist E. O. Wilson, evolution is seen as progress.

Michael Ruse is the Lucyle T. Werkmeister Professor of Philosophy, and Director of the Program in the History and Philosophy of Science, at Florida State University. He has written or edited more than fifty books, including most recently On Purpose (2017) and the OUP volumes Darwinism as Religion (2016), and The Problem of War (2018).

"A Meaning to LifeÂengagingly addresses the essential question of meaning in life, and is written by a Âphilosopher of evolutionary biology who has wrestled with this difficult issue throughout his long and distinguished Âcareer. ÂMichael Ruse takes the reader on a personal journey, starting with the ways in which meaning has been viewed by religious and secular thinkers, then turning to how science overturned our understanding of meaning, and finally drawing on Darwinian biology to present a framework for his own position.Â While confident in the capacities of science, Ruse humbly ventures his own approach to questions that ultimately lie beyond the reach of science.Â This book is a must read as a model of Socratic honesty about meaning in life." -- Michael L. Peterson, Professor of Philosophy, Asbury Theological Seminary, and author of C. S. Lewis and the Christian Worldview

"Another valuable book from the inimitable Michael Ruse who continues to write about religion and related matters in a way that is intelligent and neither fawning nor condescending. Do not be deceived by the apparent lightness of touch and endless Ruse humor (particularly about warthogs); this is a book with rich insights on almost every page." -- Michael J. Reiss, University College London

"Thoroughly infused with autobiography, casual erudition, and the characteristic humor of its author, A Meaning to Life gives an account of its title for a world in which the nature of humanity stems not from relations to God or religion, but to evolution. Tracing right and wrong turns in Darwinian conceptions of meaning, its provocative, "existentialist" proposal demands attention." -- Anjan Chakravartty, University of Miami