One of the greatest unmet challenges in conservation biology is the genetic management of fragmented populations of threatened animal and plant species. More than a million small, isolated, population fragments of threatened species are likely suffering inbreeding depression and loss of evolutionary potential, resulting in elevated extinction risks. Although these effects can often be reversed by re-establishing gene flow between population fragments, managers very rarely do this. On the contrary, genetic methods are used mainly to document genetic differentiation among populations, with most studies concluding that genetically differentiated populations should be managed separately, thereby isolating them yet further and dooming many to eventual extinction! Many small population fragments are going extinct principally for genetic reasons. Although the rapidly advancing field of molecular genetics is continually providing new tools to measure the extent of population fragmentation and its genetic consequences, adequate guidance on how to use these data for effective conservation is still lacking.
This accessible, authoritative text is aimed at senior undergraduate and graduate students interested in conservation biology, conservation genetics, and wildlife management. It will also be of particular relevance to conservation practitioners and natural resource managers, as well as a broader academic audience of conservation biologists and evolutionary ecologists. 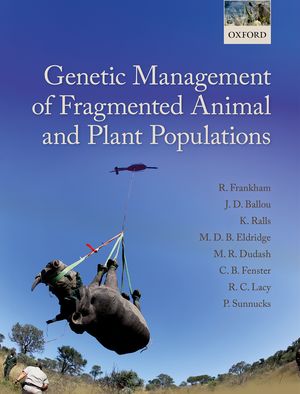