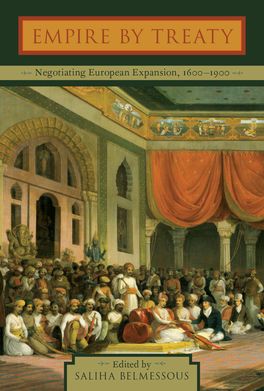 Most histories of European appropriation of indigenous territories have, until recently, focused on conquest and occupation, while relatively little attention has been paid to the history of treaty-making. Yet treaties were also a means of extending empire. To grasp the extent of European legal engagement with indigenous peoples, Empire by Treaty: Negotiating European Expansion, 1600-1900 looks at the history of treaty-making in European empires (Dutch, Spanish, Portuguese, French and British) from the early 17th to the late 19th century, that is, during both stages of European imperialism. While scholars have often dismissed treaties assuming that they would have been fraudulent or unequal, this book argues that there was more to the practice of treaty-making than mere commercial and political opportunism. Indeed, treaty-making was also promoted by Europeans as a more legitimate means of appropriating indigenous sovereignties and acquiring land than were conquest or occupation, and therefore as a way to reconcile expansion with moral and juridical legitimacy. As for indigenous peoples, they engaged in treaty-making as a way to further their interests even if, on the whole, they gained far less than the Europeans from those agreements and often less than they bargained for. The vexed history of treaty-making presents particular challenges for the great expectations placed in treaties for the resolution of conflicts over indigenous rights in post-colonial societies. These hopes are held by both indigenous peoples and representatives of the post-colonial state and yet, both must come to terms with the complex and troubled history of treaty-making over 300 years of empire. Empire by Treaty looks at treaty-making in Dutch colonial expansion, the Spanish-Portuguese border in the Americas, aboriginal land in Canada, French colonial West Africa, and British India.

Acknowledgments List of maps and illustrations 1. The Paradox of an Empire by Treaty Saliha Belmessous 2. 'Love Alone Is Not Enough': Treaties in Seventeenth-Century Dutch Colonial Expansion Arthur Weststeijn 3. To "Clear the King's and Indians' Title": Seventeenth-Century Origins of North American Land Cession Treaties Daniel Richter 4. Struggling Over Indians: Territorial Conflict and Alliance-Making in the Heartland of South America (17th-18th Centuries) Tamar Herzog 5. The Acquisition of Aboriginal Land in Canada: The Genealogy of an Ambivalent System (1600-1867) Alain Beaulieu 6. A British Empire by Treaty in Eighteenth Century India Robert Travers 7. Palavers and Treaty-Making in the British Acquisition of the Gold Coast Colony (West Africa) Rebecca Shumway 8. The Tradition of Treaty-Making in Australian History Saliha Belmessous 9. "A text for every agitator amongst the natives": Maori property, settler politics and the Maori franchise in the 1850s Damen Ward 10. The 'lessons of history': the ideal of treaty in settler colonial societies Paul Patton Contributors Index

Saliha Belmessous is a senior research fellow at the University of New South Wales. She researches and writes about European colonial ideologies and the imperial experiences of indigenous peoples. She has held research fellowships in the United States and Australia. Her most recent publications include Assimilation and Empire: Uniformity in French and British Colonies, 1541-1954 (Oxford University Press, 2013); she is the editor of Native claims: Indigenous Law against Empire, 1500-1920 (Oxford University Press, 2012).

"An invaluable addition to the legal and political history of imperial expansion, worthwhile reading as much for those interested in the history of law as for historians of empire."--Journal of British Studies