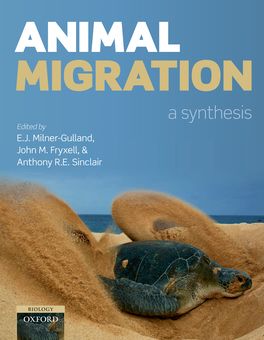 Despite the wealth of natural historical research conducted on migration over decades, there is still a dearth of hypothesis-driven studies that fully integrate theory and empirical analyses to understand the causes and consequences of migration, and a taxonomic bias towards birds in much migration research. This book takes a comparative, integrated view of animal migration, linking evolution with ecology and management, theory with empirical research, and embracing all the major migratory taxa (including human pastoralists). The scope extends beyond the target organism to consider the ecosystem-level dynamics of migration. The emphasis is on exciting new research avenues that are now opening up, whether due to advances in our understanding of migration as a biological phenomenon or through the availability of a range of new technologies. Broad themes that emerge include integrating migration into the broad spectrum of movement behaviour, the need for a comparative and cross-taxonomic approach that considers migration at a range of temporal and spatial scales, and examination of the key roles of resource uncertainty and spatial heterogeneity in driving migratory behaviour. The book identifies the potential for new tools to revolutionise the study of migration, including satellite-tracking technology, genomics, and modelling - all of which are linked to increasing computing power. We are now on the verge of a breakthrough in migration research, which is crucial given the multiple threats that face the conservation of migration as a phenomenon, including climate change.

E.J. Milner-Gulland studied Pure and Applied Biology at Oxford University, and then did a PhD in resource management at Imperial College London, modelling the harvesting of elephants, rhinos and saiga antelopes. She held a Junior Research Fellowship at New College Oxford, was a visiting post-doctoral research at the University of British Columbia and then a Lecturer in Mathematical Ecology at the University of Warwick. After that she held a Lecturership in Resource Economics at Imperial College London, and became a Reader and then Professor in Conservation Science, also at Imperial College London. Her current research interests concern the interaction between human decision-making and the dynamics of exploited populations, as well as the ecology and conservation of the migratory saiga antelope in Central Asia. John Fryxell obtained both his undergraduate and graduate degrees from the University of British Columbia. His PhD research was on the ecology of the white-eared kob - a migratory antelope in the southern Sudan. He held a lectureship at the University of British Columbia and briefly worked with the Government of Newfoundland before assuming a faculty position at the University of Guelph, where he is currently a Professor in the Department of Integrative Biology. Anthony Sinclair has conducted research in Serengeti, Tanzania, since 1965, mainly on the problem of what determines the size of animal populations, particularly vertebrates, and the mechanisms of regulation. This work has expanded to look at the whole ecosystem, documenting how the different components of soils, plants, herbivores and predators interact. In particular, he is interested in how to provide scientific advice for conservation. In Canada he was part of the Kluane Boreal Forest Ecosystem project in the Yukon. This large-scale experiment examined the workings of the northern spruce forests, in particular what caused the 10-year cycle of snowshoe hare numbers. Between 1992 and 2002 Dr. Sinclair collaborated with colleagues in the CSIRO, Sustainable Ecosystems division, Commonwealth Government of Australia in experiments on the conservation of endangered marsupial prey and their exotic predators, the red fox and feral cats.