The Politics of Protest 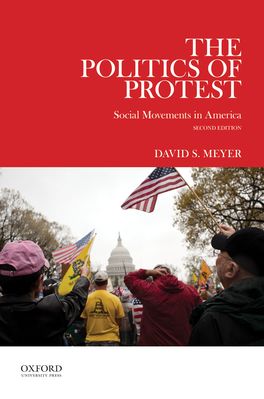 The Politics of Protest

The Politics of Protest offers both a historical overview and an analytical framework for understanding social movements and political protest in American politics. Meyer shows that protest movements, an integral part of our nation's history from the Boston Tea Party to the Civil Rights Movement, are hardly confined to the distant past. He argues that protest movements in America reflect and influence mainstream politics and that in order to understand our political system--and our social and political world--we need to pay attention to protest.

The Politics of Protest opens with a short history of social movements in the United States, beginning with the development of the American Republic and outlining how the American constitutional design invites protest movements to offer continual challenges. It then discusses the social impulse to protest, considers the strategies and tactics of social movements, looks at the institutional response to protest, and finally examines the policy ramifications. Each chapter includes a brief narrative of a key movement that illustrates the topic covered in that chapter.

New to This Edition

* A new chapter on media and movements (Chapter 6: Protest and Communication: New and Old Media) that examines how media has changed in the past two decades, focusing in particular on online activism
* New discussions on such topics as the election of a black president, the emergence of the Tea Party movement, and the intensifying conflict regarding immigration policy
* More material on the successes of the gay and lesbian movement in promoting policy changes to marriage at the state level and in national military service

Preface Introduction 1. America and Political Protest: Political Institutions and Dissent 2. Why Protest? The Origins of Movements, Opportunities, and Organizations 3. Becoming an Activist 4. Individuals, Movements, Organizations, and Coalitions 5. The Strategy and Tactics of Social Protest 6. Protest and Communication: New and Old Media 7. Civil Disobedience 8. The State and Protests: Institutionalization 9. When Everyone Protests 10. The Policy Connection: How Movements Matter 11. Protest and American Politics: What's Next? References Index

David S. Meyer is Professor of Sociology, Political Science, and Planning, Policy, and Design at the University of California, Irvine.

"This is an accessible but thorough treatment of social movements presented in an engaging format. The coverage is broad yet thorough without becoming shallow. Meyer does an effective job of telling stories in an interesting manner and then integrating these stories with engaging theoretical discussion."--Steve Garrison, Midwestern State University