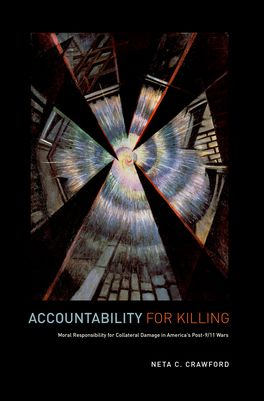 The unintended deaths of civilians in war are too often dismissed as unavoidable, inevitable, and accidental. And despite the best efforts of the U.S. to avoid them, civilian casualties in Afghanistan, Iraq, and Pakistan have been a regular feature of the United States' wars after 9/11. In Accountability for Killing, Neta C. Crawford focuses on the causes of these many episodes of foreseeable collateral damage and the moral responsibility for them. The dominant paradigm of legal and moral responsibility in war today stresses both intention and individual accountability. Deliberate killing of civilians is outlawed and international law blames individual soldiers and commanders for such killing. An individual soldier may be sentenced life in prison or death for deliberately killing even a small number of civilians, but the large scale killing of dozens or even hundreds of civilians may be forgiven if it was unintentional--"incidental"--to a military operation. The very law that protects noncombatants from deliberate killing may allow many episodes of unintended killing. Under international law, civilian killing may be forgiven if it was unintended and incidental to a militarily necessary operation.

Trenchant, original, and ranging across security studies, international law, ethics, and international relations, Accountability for Killing will reshape our understanding of the ethics of contemporary war.

Neta C. Crawford is Professor of Political Science and African American Studies, Boston University, and author of Argument and Change in World Politics (Cambridge, 2002; winner of the 2003 Robert Jervis and Paul Schroeder Best Book Award, International History and Politics section of the APSA)

"Starting with the post 9/11 wars, Neta Crawford's book takes seriously this question: who bears responsibility for civilian casualties in war? After copious research and thoughtful engagement, she offers both a new way to conceive of moral responsibilities for civilian casualties and practical suggestions for engaging citizens and the military in these broader responsibilities."--Joan C. Tronto, Professor and Chair, Department of Political Science, University of Minnesota

"In a magnificent new and uncannily timely work, Professor Crawford has skillfully , as she puts it, 'pushed the boundaries of theorizing about moral responsibility in war.' Her work is fresh, well-researched, and readable. Most importantly, it is engagingly provocative and is sure to generate thoughtful discussion. A 'must have' for any serious scholar, soldier, or policymaker."--Charles J. Dunlap, Jr., Major General, USAF (Ret.)Executive Director, Center on Law, Ethics and National Security and Professor of the Practice of Law, Duke University School of Law

"Crawford's deeply reasoned and carefully researched book is an essential read for anyone grappling with how to enhance moral and political responsibility for civilian killing in modern war."--Kathryn Sikkink, McKnight Presidential Chair in Political Science, University of Minnesota