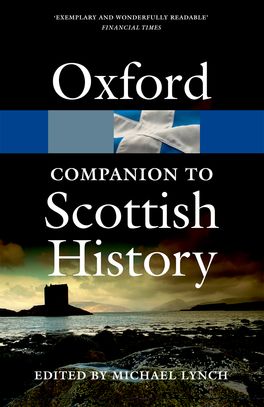 The Oxford Companion to Scottish History interprets history broadly, including archaeology, architecture, climate, culture, folk belief, geology, and the langauages of Scotland. It covers more than 20 centuries of history, including immigrants, migrants, and emigrants. It extends from Orkney and Shetland to Galloway, the Western Isles to the Borders. It deals extensively with Scots abroad, from Canada to Russia to New Zealand. It includes entries on historical figures from Columba, Macbeth, and William Wallace to James (Paraffin) Young. It covers Burns Clubs, curling, and shinty. It ranges from clans to Clearances and Covenanters.
Over 500,000 words in length, and written by more than 70 distinguished contributors, it aims to explain as well as describe. It is more than a historical dictionary or an encyclopedia. Multi-authored entries analyse key themes such as kingship, national identity, women and society, urban and rural life, the economy, housing, living standards, and religious belief across the centruies in an authoritative but approachable way.
The Oxford Companion to Scottish History has a broader range of topics and approaches, and a more authoritative list of contributors than any of its competitors. It also stands alone in providing analysis of issues such as national identity and living standards.

Michael Lynch was formerly Sir William Fraser Professor of Scottish History and Palaeography at the University of Edinburgh. He was also Chairman of the Ancient Monuments Board for Scotland and President of the Historical Association of Scotland.

`a treasure-trove of informed entries ... will become the main point of entry for both serious and casual readers of Scottish history' History Today

`brings freshness to both subject matter and writing ... accurate and reliable' History Scotland