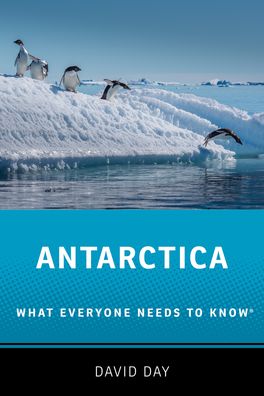 Part of the What Everyone Needs to Know® series, David Day's book on Antarctica examines the most forbidding and formidably inaccessible continent on Earth. Antarctica was first discovered by European explorers in 1820, and for over a century following this, countries competed for the frozen land's vast marine resources—namely, the skins and oil of seals and whales. Soon the entire territory played host to competing claims by rival nations. The Antarctic Treaty of 1959 was meant to end this contention, but countries have found other means of extending control over the land, with scientific bases establishing at least symbolic claims. Exploration and drilling by the United States, Great Britain, Russia, Japan, and others has led to discoveries about the world's climate in centuries past—and in the process intimations of its alarming future.

Delving into the history of the continent, Antarctic wildlife, arguments over governance, underwater mountain ranges, and the continent's use in predicting coming global change, Day's work sheds new light on a territory that, despite being the coldest, driest, and windiest continent in the world, will continue to be the object of intense speculation and competition.

1. First Contact
2. The Race for Antarctica
3. Imperial Rivalry
4. War on the Ice
5. Science and Discovery
6. Profiting from Antarctica
7. The Antarctic Treaty
8. Global Warming
9. The Future of Antarctica

David Day has been a research fellow at Clare College in Cambridge and a Visiting Professor at University College Dublin, the University of Aberdeen, and the Center for Pacific and American Studies at the University of Tokyo. He is currently a research associate at La Trobe University in Melbourne. He is the author of many books, including Conquest: How Societies Overwhelm Others and the award-winning Claiming a Continent: A History of Australia.