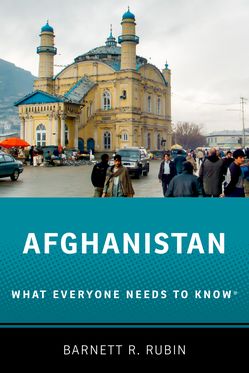 Afghanistan, a landlocked country in Central Asia, has improbably been at the center of international geopolitics for four decades. After the Soviet Union invaded in 1980, Afghanistan descended into an unending conflict that featured at various points most of the world's major powers. In the mid-1990s, the country entered a new phase, when the Taliban took power and imposed order based on a harsh, repressive version of Islamic law. Infamously, the sheltered Osama bin Laden, whose attack on 9/11 Towers ushered in the Global War on Terror, drew tens of thousands of American troops to the country, where they remain today.

In Afghanistan: What Everyone Needs to Know®, leading scholar Barnett R. Rubin provides an overview of this complicated nation. After providing a concise history of Afghanistan, he explores the various peoples and cultures of the country and its relations with neighbors like Pakistan and Iran. He also provides an authoritative overview of the conflicts that have plagued the country since the Soviet invasion. Both wide-ranging and pithy, this book explains why Afghanistan matters and what its possible future might look like.

Barnett R. Rubin is Senior Fellow and Associate Director of the Afghanistan-Pakistan Regional Project, Center for International Cooperation, New York University. He also served in the Obama Administration as Senior Advisor to Richard Holbrooke, the US Special Representative for Afghanistan and Pakistan. Rubin is the author of The Fragmentation of Afghanistan (Yale) and Afghanistan from the Cold War through the War on Terror (Oxford).

"It speaks to everyone. It provides new lessons on Afghanistan as well as the stakeholders engaged in the post-war state-building." -- Hafizullah Nadiri, South Asia Journal